The Makalu is with 8463 m the fifth highest mountain of our earth. His name comes from Sanskrit and means in German “the great black man” (Maha Kala). Only 22 kilometers as the crow flies, it separates it from the highest mountain in the world, the 8850 meter high Mount Everest, located further to the east in Solu Khumbu. The Makalu itself is located in the middle of the Makalu-Barun National Park and Conservation Area, founded in 1992. It covers an area of ​​2330 square miles, adjacent to the western Sagarmatha National Park of Nepal and Tibet’s Qomolangma Natural Reserve “Connects in the north.

Although the even mountain form of Makalu attracted mountain climbers early on, the inaccessible steep ice flanks and bare rock walls initially thwarted all ascent attempts. Only in the spring of 1954, an American expedition under William Siri and a New Zealand team under Sir Edmund Hillary tried on the “big black”, but had to pull home again unrequited things. More success was granted to a French exploration expedition under Jean Franco in the autumn of the same year, which reached with six members, after all, the side summit, the Kangchungtse, 7678 m. In the spring of the following year, Franco put it one step further by joining the main summit with all members of his nine-man expedition from 15 to 17 May 1955 (three waves: May 15 Jean Couzy and Lionel Terray, May 16 Jean Franco, Guido Magnone and Sherpa Gyalzen, May 17, Jean Bouvier, Serge Coupé, Pierre Leroux and André Vialatte) – the first time on an eight-thousander that all participants reached the summit. The path over the west wall, the Makalu La – a saddle at 7400 meters altitude – and the northeast ridge is today referred to as the “French Route”. Much of Makalu’s ascent is made via this route.

Trekking
The long trekking into Makalu BC is characterized by strong contrasts. The path leads from the densely populated cultivated land of Solu Khumbu into the glaciated ice desert of the high valleys of Hongu and Baruntals. From Lukla, 2860 m, which is served by plane, follow the path first on the main artery of trekking tourism towards Mount Everest Basecamp. 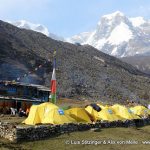 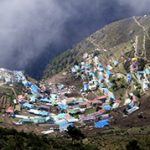 Through countless terraced fields and small villages you follow the well-developed path steadily higher, until the vegetation becomes increasingly barren and finally at Dingboche, 4410 m, and Chukhung, 4730 m, the last villages give way to isolated alpine pastures. Now the limits of both civilization and the Khumbu area have been reached. 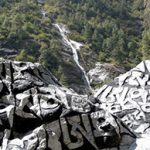 The further route leads over the glaciated „Ice Cols“ into the Hongu and finally into the Barun valley, where the Makalu base camp is located. First, the famous Amphu Laptsa Pass, 5800 m, must be crossed to reach the Hongu Valley. Past the large lakes of the „Panch Pokhri“ (Five Lakes) you reach the base camp of the Baruntse, 7129 m, a well-known seven thousand meter high. 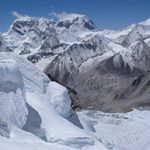 After the so-called „West Col“, 6135 m, has climbed, the vast, column-glaciated glacier area of ​​the „Lower Barun Glacier“ leads past the high camp 1 of the Baruntse to the „East Col“, 6150 m, the last obstacle to the crossing. All three pass crossings are glaciated, require block climbing and sometimes longer Abseilmanöver. They are only recommended to the experienced high-mountaineer – but then a special adventure. 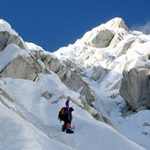 Finally, the barren Barun Valley is reached. Over the historic „Hillary Basecamp“, 4800 m, is climbed into the side valley of the Chago Glacier. After a tedious glacier crossing and a steep ascent through trackless blocks and boulders you arrive at the now common base camp (ABC) of the Makalu at 5650 m altitude. 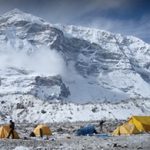 After the time on the mountain, the return journey takes you across the idyllic Shipton La (Shipton Pass) from the Barun Valley to the valley of the great Arun River. Views of the eight-thousand peaks Makalu, Mt. Everest, Lhotse and Kanchenjunga, lush nature with dwarf rhododendron, maple and birch groves and rare mountain animals, such as musk deer, Himalaya Tarh or snow leopard, are just a few of the many impressions from the Himalayan mountains, who make the time on the way home anything but boring. 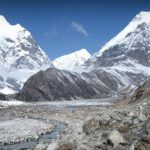 Gradually the largely uninhabited cultivated land and primeval forest populated by high-mountain landscape, which is broken by a few yak trees, gradually gives way. Village joins village and the climate is becoming increasingly subtropical. After a large suspension bridge, where the Arun River is crossed, the hamlet of Num is reached. Shortly thereafter, the road begins, which leads via Khadbari to Tumlingtar, 430 m. 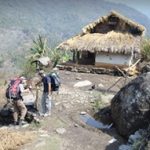 There, the penultimate station of the return journey is reached. A small plane brings climbers and baggage from here to Kathmandu, 1300 m, the capital of Nepal. After a few days in the Nepalese capital, the journey home will begin.

While trekking to the base of Mera Peak, our prepa

Off to Everest again - like every spring in the la

This website uses cookies to improve your experience while you navigate through the website. Out of these, the cookies that are categorized as necessary are stored on your browser as they are essential for the working of basic functionalities of the website. We also use third-party cookies that help us analyze and understand how you use this website. These cookies will be stored in your browser only with your consent. You also have the option to opt-out of these cookies. But opting out of some of these cookies may affect your browsing experience.
Necessary immer aktiv
Necessary cookies are absolutely essential for the website to function properly. This category only includes cookies that ensures basic functionalities and security features of the website. These cookies do not store any personal information.
Non-necessary
Any cookies that may not be particularly necessary for the website to function and is used specifically to collect user personal data via analytics, ads, other embedded contents are termed as non-necessary cookies. It is mandatory to procure user consent prior to running these cookies on your website.
SPEICHERN & AKZEPTIEREN